Posted on December 23, 2014 by scottcarberry

This post is long overdue.  For years, there was a book that was missing from my ‘Baltimore Books’ collection.  Missing, due to my own stupidity.

When I was boy, my Uncle Kelly gave me his copy of “Football’s Miracle Men, the Baltimore Colts’ Story”. It was written by the dean of Baltimore Sportswriters, John Steadman.  Let’s take a look at old John. 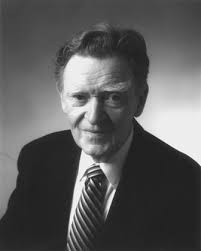 Like I said, it’s been missing from my collection.  I couldn’t be more ashamed that I managed to misplace it sometime in my late teens or early twenties.  But let me say this; I knew the book inside and out.  I had almost memorized all of the stories about the beginning of Baltimore’s beloved Colts.  I could name long-dead Colts executives like they were rock stars.  Oooohhh Don Kellet’s DREAMY!!! This book came out in 1959! The Colts had just won their first Championship in 1958 over the New York Giants in ‘The Greatest Game Ever Played’! John Steadman was not the kind of guy to wait for the paint to dry!

A couple of years ago, Anna and I were walking down main street Ellicott City and in the one of the antique shops was the book!!  I recognized it immediately!  I of course, rushed in and thumbed through it and reminisced about what the book meant to me.  It was a little pricey at $60 and I didn’t buy it.

It wasn’t too much later that I guess I had a birthday or we were celebrating our Anniversary, that Anna presented me with a gift that I eagerly ripped the wrapping paper off of and my jaw dropped, it was the book! But it was even better.  It was in pristine condition to include the dust cover.  I never knew that it HAD a cover.  I’d only ever seen it in plain, blue hardcover. 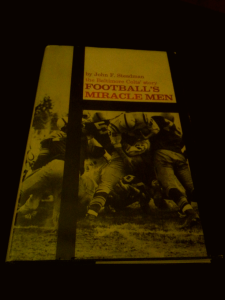 Jeez, I have got to figure out how to get better at taking photos with my Smartphone.  Anyway, you save it to your computer and enlarge it. I spent an half hour trying to make it look better than that.  Here is the point, go ahead and ask me what my favorite football team is…g’head, g’head!!  Yes, I love the Ravens but I will always love the Baltimore Colts.  One of the reasons is that my Uncle Kelly gave me this book and even though I was without it for years, I’ve gotten it back, better than before.  Oh yeah! It’s better because I do have the dustcover for it and on the back of it, there are some quotes from famous people that had read the book.  One of those folks was none other than Bob Hope! 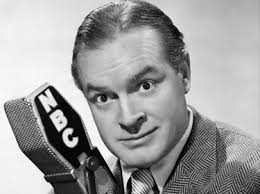