Play Misty for me Baltimore!

This past Friday provided me with two instances of the weepies.  Good weepies, happy weepies.  These moist eye moments were brought on by some things that are particularly heart warming and prideful to a person, like myself, who is possessed of a love of being a Baltimore native.

I work out at the YMCA@Stadium Place.  Stadium Place, for the unknowing, is the green space that resulted from the demolition of Baltimore’s beloved, Memorial Stadium.

In this space, as I’m sure that you can glean from the previous sentence is now home to a YMCA.  There is also housing for senior citizens, which I do think is a nice use of the space but, yes, there is more.  In the past year Ripken Baseball has built a very nice little league ball field.  It is very nicely constructed and they have even taken care to place home plate in the exact location that it resided in Memorial Stadium.  I don’t think that it’s quite finished yet, but I found some neighborhood kids under the supervision of an adult playing a pickup game!  This is what got me weepy the first time.  I just thought that it was beautiful.  This is ultimately what the Ripken Foundation is trying to engender; a love of the game amongst kids and most in particular, city kids, who’s desire to play baseball has waned in recent years.

Check out this artist’s rendering of the completed field.

So I’m feeling all warm and fuzzy after this experience.  I head home to eagerly wait for my lovely fiancee to come home from her work week so we can snuggle on the couch with our cat, Lucy. 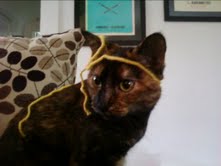 She's making me a sweater.

So I plop on said couch, thwack on the TV and tune to Channel L’Histoire and I find that they are playing a 2 hour documentary about the War of 1812.  I just happen to join the documentary as the British have burned Washington DC and the White House.  If you know you’re history, the British start their push to Baltimore at this point.  I am in heaven!  So I hunker down to the sweet narrative tones of Mr. Edward Herrman, or as most of the world knows him, Rory Gilmore’s Grandpa.

No! I do NOT have Lauren Graham's phone number!

History Channel spared no expense.  This doc has got a boatload of battle scenes and little known facts provided by scholars and the National Park Rangers that work at Fort McHenry and it is just a pretty darn good comprehensive study of how the British forces were repelled by a mixture of Maryland militia and the Soldiers, Sailors and Marines and citizens who defended Ft. McHenry and Baltimore City itself.  When I start getting into stuff like this, I get all misty.  The Siege of Ft. McHenry inspired Francis Scott Key to write the Star Spangled Banner and Baltimore pretty much preserved our young country.  So a tip of the hat to the History Channel for sharing this with the world.

What a pompous, H.

Oh say can you see?!

Something else, I kinda dig is that our Governor here in MD, Martin O’Malley used to be the Mayor of Baltimore City.  If you don’t know, this guy is a veritable font, (or is it fount?) of knowledge when it comes to Baltimore history.  For years he fronted an Irish-centric rock band called O’Malley’s March.  The one time I saw his band play, they opened for Shane MacGowan and the Popes and in between almost every song, he gave a little Baltimore history lesson to illuminate the song they were about to play.  I thought it was wonderful!  Hands up, whose Governor has opened for Shane MacGowan?!  Check out this photo of Maryland’s rock star governor, 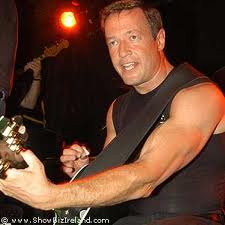 This next song is about jobs creation and the new inter-county connector! WOOOOHOOO!

It’s good to have an elected official who is just a bit of a dork and or nerd when it comes to the community that they serve.

I’ll finish by saying that if you’ve never taken the opportunity to visit Ft. McHenry, I highly recommend it.  Make sure that you look out onto the Chesapeake Bay and imagine the British Navy firing thousands of 200 pound cannon balls onto your position and then revel in the beauty and peace that surrounds you.  I bet you get a little misty.

4 Responses to Play Misty for me Baltimore!