Posted on February 5, 2011 by scottcarberry

I saw in the Baltimore Sun a couple of days ago that the two historic ships that reside in Baltimore’s Inner Harbor, The USS Constellation and the USS Torsk were both headed to dry dock for repairs and maintenance.  I love both of these wonderful boats and what they mean for our civic pride and tourist dollar coffers.  The Constellation is far better known than the Torsk.  It is in a significantly more advantageous line of sight and it is impossible to watch any Baltimore sporting event that is being broadcast nationally without a couple of shots of the Constellation being beamed to that national audience.

I have visited the Constellation but I am indeed fonder of the USS Torsk .  I have also visited the Torsk, but when I did so, I was 7 or 8 years old and I was with my Grandfather, Jim Carberry.  Our visit to the Torsk occurred before the building of Harbor Place, a time when the Inner Harbor was anything but a tourist attraction.  I believe that John Water’s once referred to the Inner Harbor area as the best place to get stabbed by a lesbian in a biker bar.  Even though the Torsk and the Constellation were there before the re-branding of Baltimore, they definitely were important pieces in allowing Baltimore’s Downtown to be developed into the showplace that it is today.

Of all the photos of the Torsk available  on line, this one just looks like it was taken in 1973 or thereabouts.

Dig those teeth!  It is impossible for any little boy to not lose his mind when he sees this huge shark thing.  It was amazing to board it and crawl around inside and I swear, even when I was little I thought it was hard to maneuver in.  When you entered rooms on the sub, you had to pass through an elliptical portal, lifting your leg while ducking your head.  Cramped quarters, Indeed!  Dig this old school photo of one the roomier rooms on board. 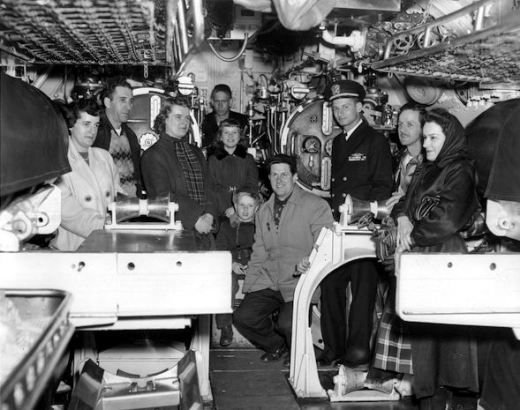 Um...sylvia, may I reccommend, Beano.

I must admit that what makes me most nostalgic for this wonderful seafaring war machine relic is that it is the only thing that I can remember doing with my Grandfather.  He died in 1977 and I have many sweet memories of him but I cannot recall going out and doing things with him.  I have this memory and the memory of us visiting, what in his words was, “The oldest bar in Baltimore”.  It kills me that I can’t remember what that bar was or even what neighborhood it was in.  I will say this, it was indeed, decrepit.  I recall that it was dank, dark and dusty in the middle of the day.  It was replete with a severely tarnished brass rail and spittoon and the table that I had to sit at while Pop bellied up to the bar was literally falling apart.  The man was not pulling my leg, this was an OLD bar.

As I write this,  it dawns on me that these two memories probably occurred on the same day.  I don’t mind.  I’m lucky to have these memories at all. And we are lucky to have the Torsk and when it comes out of dry dock I’m gonna visit it again and marvel at it anew.

Gotta shine her up for Scotty!